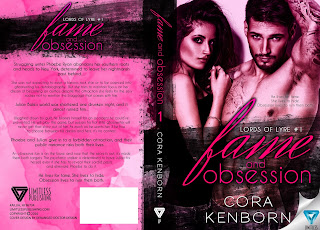 Blurb:
Struggling writer Phoebe Ryan abandons her southern roots and heads to New York, determined to leave her nightmarish past behind…

She was not expecting to meet a famous rock star, or to be coerced into ghostwriting his autobiography. But she tries to maintain focus on her dream of becoming an author, despite the attraction she feels for the sexy rocker, not to mention the baggage that comes with him.

Julian Bale’s world was shattered one drunken night, and it almost ruined him…

Weighed down by guilt, he blames himself for an accident he could’ve prevented. He will play the game, but swears his hot little ghostwriter will never get that story out of him. As much as he wants her, if he has to choose between his dream and hers, it’s no contest.

Phoebe and Julian give in to a forbidden attraction, and their public romance risks both their lives…

An obsessive fan is on the loose and now that the secret’s out, it’s made them both targets. The psychotic stalker is determined to have Julian for herself, even if she has to reveal their sordid pasts and eliminate Phoebe to do it.

He lives for fame. She lives to hide. Obsession lives to ruin them both.

Author Bio:
Cora Kenborn writes romantic suspense novels with strong heroines, complex alphas, harrowing danger, and snappy banter. She is the author of the rock star stalker series, Lords of Lyre but refuses to be pigeon holed into one specific genre. She loves delving into the twisted mind of a dark villain as well as giggling while writing rom-com banter.

Cora lives in Eastern North Carolina and is a true Southern girl, growing up on sweet tea, front porches, and the simple life. She says “y’all,” “fixin’ to,” and should you deserve it, will “bless your heart.” She’s the proud mother three hyperactive and occasionally adorable children, and the wife of a husband who tolerates her chaotic writer’s cave.

Although reading is her passion, she can usually be found watching true crime shows and crafting inspiration for twisted new tales. Cora admits to being a horrible cook, an even worse baker, and believes she’s more dangerous with a hot glue gun than any weapon on earth. Oh, and she and autocorrect are mortal enemies. 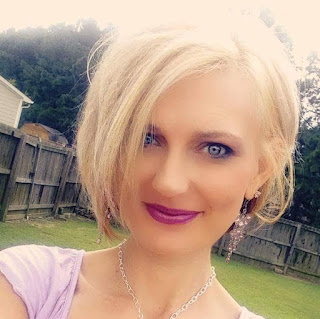 Excerpt:
The coiled body behind me tensed, ready to detonate. Whoever defended me could hold his own, but I could still take everybody out with one flick of the wrist. Chivalry felt warm and fuzzy but I learned a long time ago that one hundred and fifty volts felt electric and twitchy.
Turning my chin to the side, I whispered on an exhale, “It’s fine, I’ve got this.”
A low laugh against my neck curled my toes.
“You so don’t got this.” His chest rumbled as a strong hand ran skilled fingers around my hair. I tilted my chin, watching his eyes harden. “You’re up my ass, shit-for-brains. Don’t ever touch what’s mine.” He shifted his lips against my ear. “Right, baby?”
One suitor tested my patience, but two pushed my limit. I opened my mouth to tell him off when he stole the moment and pressed his lips against mine. Resisting, I murmured veiled threats as he pulled me toward him. The impromptu kiss dissolved into failed waves of aggression, and I inexplicably responded to him. Before I knew it, I’d wrapped my arms around his neck.
After a few heartbeats of kissing a complete stranger, I finally regained what dignity I had left, shoved his chest, and faced him with fire blazing in my eyes. He snickered and waved as my aggressor stalked off. Shooting him a death glare, I reached for my drink. After scanning for witnesses, I brought it to my lips and drained it.
“Thirsty?” He smirked.
“What the hell was that?”
He snatched the drink out of my hands, giving me a wink before tipping it back for the last drop. “You weren’t exactly pushing me away. Besides, I just saved your ass. Heath Vaughn was inches from having a hand up that thing you call a dress.”
“I didn’t ask for your help!” I bit back. “I don’t even know who the hell you—wait, who?”
“Somebody had to step in or you’d have spent the night in jail with that concealed, illegal shit in your purse. You’re telling me you didn’t know that was Vaughn? Maybe because we haven’t time-warped back to his 1995 five minutes of fame.” He walked past me with a smirk plastered across his face.
Struggling to catch up with him, I grabbed his shoulder in disbelief. “That’s a joke, right?”
“Afraid not. Vaughn in the flesh, and apparently in the sauce too. Why do you care so much what he thinks?” He eyed me curiously, his jade-green eyes knocking me breathless.
Finally allowing myself a full look at him, I quickly averted my eyes before he could see my racing pulse reflected in them. Chaotic chocolate spiked hair pointed in every direction and hinted at a carefully constructed morning-after look. A small silver earring caught flashes of light in the darkness and tattoos decorated each uncovered arm.
Remembering to breathe became a chore.
“Because I’m screwed!” I shouted, frantically waving my phone. “My boss is already pissed at me, and I was supposed to meet Vaughn here for an interview, and—why am I telling you this?”
“Calm down.” He grinned, revealing a deep dimple in his left cheek. “Look, the dude’s so far tanked he won’t remember he was here, much less you were. Give me your phone.”
“I’m not giving you my phone. I don’t even know you.”
Rolling his eyes, he snatched my phone out of my hands. “Didn’t stop you from making out with me, did it?” He scanned the email I’d been checking all night. Typing furiously, his lips curved upward and he handed it back. “All fixed.”
“What did you do?” Thankfully, previous defense training taught me to never label emails with personal information. In the darkness, he’d never scroll back far enough to know my name.
“Why must you question brilliance?” he countered with a sigh. “You sent him an email concerned for his safety since he never showed for your interview. You waited but had to leave because you actually work for a living. You’d love to reschedule since you’re such a huge fan and were disappointed at the missed opportunity to hear all about his crap-ass reality show, since I assume that’s all he would’ve wanted to talk about.”
I could’ve kissed him—if I hadn’t already.
“You’re an evil genius.”
“So I’ve been told.” 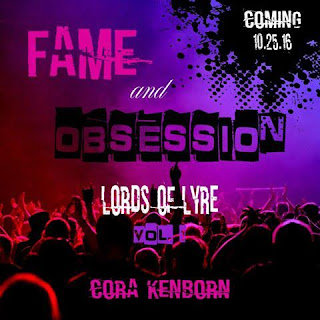 Popular posts from this blog

TRUE IDENTITY IS AVAILABLE NOW IN AUSTRALIA AND WEDNESDAY IN THE US! WELCOME TO THE WORLD OF HARLEY AND MAC! BLURB: I don’t know who I am. I can’t remember my name, where I come from, or how I ended up in the hospital with a bullet wound to my chest. When I think back, searching for a memory, all I see is a big black hole of nothing. But I recall her voice…the sweet, angelic sound that reached out to me through the coffin of black, pulling me back to the light. I might not know anything about my past, my life, my identity—but the moment I opened my eyes and stared straight into hers, I knew I wanted her. I knew there was no way in hell I would let her go. Now I need to piece back together the missing fragments of my life so I can figure out where she fits into it—or if she fits into it at all. The only problem is if your past is buried beneath a shroud of darkness, you have no idea when it might come back to haunt you. Available on Amazon &
Read more
August 02, 2017 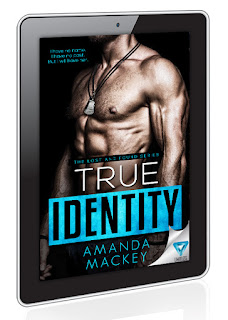 My new military romance True Identity is up for pre-order! Get it automatically delivered to your inbox on August 15th! I don’t know who I am. I can’t remember my name, where I come from, or how I ended up in the hospital with a bullet wound to my chest. When I think back, searching for a memory, all I see is a big black hole of nothing. But I recall her voice…the sweet, angelic sound that reached out to me through the coffin of black, pulling me back to the light. I might not know anything about my past, my life, my identity—but the moment I opened my eyes and stared straight into hers, I knew I wanted her. I knew there was no way in hell I would let her go. Now I need to piece back together the missing fragments of my life so I can figure out where she fits into it—or if she fits into it at all. The only problem is if your past is buried beneath a shroud of darkness, you have no idea when it might come back to haunt you.  https://www.amazon.com/True-Identity-Lost-Found
Read more
April 24, 2017

BROCK PAINE A star is born Easing up the dark driveway, I had no idea what to expect upon my first meeting with Brock Paine. I’d been asked to meet the teenager after agreeing to write an article, pertaining to his incredible racing portfolio. That in itself was an amazing opportunity but two key elements made it even greater. Not only was Brock just fifteen years of age, but it had been brought to my attention that he’d suffered from Cystic Fibrosis since birth. Cystic Fibrosis (CF) primarily affects the lungs and digestive system because of a malfunction in the endocrine system, responsible for producing saliva, sweat, tears and mucus. The mucus causes impairment of the digestive functions of the pancreas and traps bacteria in the lungs resulting in recurrent infections which lead to irreversible damage. On average in Australia, one baby is born with CF every four days. There is no cure. Knowing this information as I parked under the double story home, overlooking
Read more